March 18, 2009 at 4:12 PM
comment
Stand-up comic Doug Stanhope tends to forgo television for the credits that really count, from self-booking, promoting and selling out underground venues across the states, to leaving his own special stain on comedy festivals around the world. 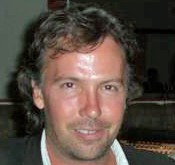 Stanhope's fanbase is rabid: one that hollers in drunken, knowing agreement to every biting social criticism and debauched narrative, with frequent self-effacing rambles thrown in for good measure.

Although some choice moments from his appearances on Howard Stern and Girls Gone Wild -- the "ubiquitous pseudo-porn for the sexually crippled," took on "solely and shamelessly for financial gain" -- remain beyond the reaches of YouTube, Stanhope still retains a veritable treasure trove of video malfeasance.

Stanhope appears on Friday at the Firebird. Brett Erickson opens the show (details). Tickets are available through Brown Paper Tickets.

1. Part of the UK's Comedy Lab series on Channel 4, Stanhope mixes it up with the locals and not-so-locals in this examination of immigration.


2. He's no stranger to odd gigs, and given his affinity for all things DIY, why wouldn't Stanhope leap at the chance to headline a show in a Las Vegas backyard? And terrorize the neighbors while he's at it?

3. Last year Stanhope and a merry band of malcontents took over Chicago's Lakeshore Theater for the evening. Good idea on paper, less so in execution, the footage lives on here as a comedy circus gone awry...and still missing its long-promised Episode 6.

4. Your generation, btw, sucks ass, but not for the reasons you might think. From 2007 Showtime special No Refunds.


5. Stanhope's Invasion of the Hidden Cameras (and its boot-stomper of a theme song) offered so much in such a short timeframe: "Electroshock Therapy"? "Nanna Needs a Ride"? "Doggy Sex Change"? Let's just settle on "Drunken Paramedic" as the tip of the discomfort iceberg.


7. How to compete with the likes of George Carlin, Chris Rock and Bob Saget on the 2005 filthumentary The Aristocrats? Well, borrow someone else's baby, for starters...


10. Grainy and gritty, this slice of abortion material from the Deadbeat Hero DVD is the true test: Laugh and you'll be a fan for life.