Ernest Trova: Genius or Hack? You Make the Call!

St. Louis artist Ernest Trova died this week at the age of 82. During his lifetime Trova was lauded as an artistic innovator and assailed by some as a commercial producer of kitsch.

His popular Falling Man series made him something of a household name in art circles in the 1960s, with institutions such as New York's Museum of Modern Art and London's Tate Modern displaying Trova works. By the 1990s, though, some of his sculptures and prints could appear a bit -- well -- dated.


"Perhaps because of the accessibility of his art at Laumeier Sculpture Park and in other public collections around town, St. Louis has long taken Trova for granted, failing to recognize the impact his work had internationally in the 1960s and since," wrote Strauss. "Silva would do well to conduct a bit of research before taking it upon himself to revise the history of modern art..."

Perhaps Strauss is right. But you know what they say about the eye of the beholder. In this post you'll find six pieces of Trova's work. Scope them out to your heart's content, then vote in the poll (after the jump) and tell us: Was Ernest Trova a hack or a genius? (Feel free to leave comments bolstering your argument.) 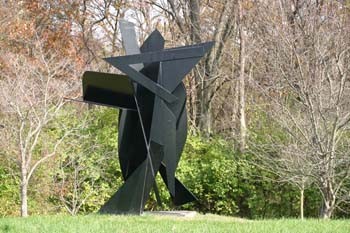 So what is it, folks? We wanna know!