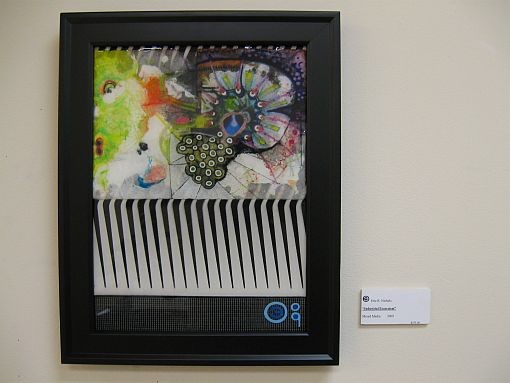 Originally from Decatur, Illinois, Nichols moved to St. Louis in 1985, and has since earned art degrees from the Kansas City Art Institute and Southern Illinois University Edwardsville. Until recently, Nichols served as a teacher of art at St. Louis Community College at Meramec.

Perhaps best known as a sculptor, Nichols describes his wall-hangings at D-Zine as presenting "visual problem[s]" due to their interaction of layers.

The crowd was small at first Friday, but gradually grew as Delmar passers-by paused to take a closer look. Nestled in between the haircare products and the velvet couches of the hair salon sat young hipsters and elderly suburbanites. And though it never filled to capacity, the space soon resembled the scene at more traditional art openings.

Nichols says that, like many in the art community, he has come under some hard times, and recently sold his car and house to make ends meet. "It's rough, but I'm having fun," says Nichols. "I don't make money -- yet."