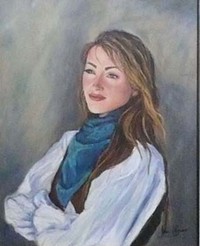 Actress Jane Seymour -- she of Unreal's favorite 1990s television drama Dr. Quinn Medicine Woman and more recently a contestant on Dancing with the Stars -- is headed to town this month to promote her artwork.

According to a hot-of-the-presses news release, Seymour began painting a decade ago "prompted by a period of personal challenge." (The cancellation of Dr. Quinn, perhaps?) And her work has been described as "an expression of a very private healing process." (Small pox? Gout?)

Whatever the case, no one can say that doctors don't make house calls anymore. Dr. Quinn, herself, (a.k.a. Seymour) will be in attendance when the exhibit opens on March 27 and 28 at the Wentworth Gallery at West County Mall.