What Rhymes with "Blowhard?" 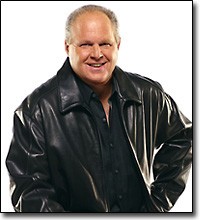 Break out your rhyming dictionaries and begin honing your sense of political commentary to Jon Stewart-esque sharpness. New Line Theatre, the company that brought you Johnny Appleweed and the first non-Broadway staging of High Fidelity, is looking for collaborators to create songs and scenes for a new musical: Rush Limbaugh Saves the World.

Artistic director Scott Miller and writer-director Todd Schaefer are on the hunt for songs about Rush, obviously, but they also want songs that use Limbaugh as a point of departure to address pop culture, politics, the nature of talk radio as entertainment -- the whole magilla of political discourse in America.

Rush Limbaugh Saves the World is intended to be a composite piece, similar to Jacques Brel is Alive and Well and Living in Paris and Assassins, and it will be staged during the 2010 St. Louis Political Theatre Festival. Miller and Schaefer need songs that are smart and provocative, but they're not interested in flat-out bitching or character assassination; slander ain't nearly as funny as satire.

That said, vulgar language is not a deal-breaker, and neither are adult themes. New Line is all about intelligent, adult entertainment, after all.

For full details on how to submit a piece, deadlines, format and information on rights ownership and royalties of accepted pieces, visit this handy-dandy Web site.