Area Men In the Vicinity of Success 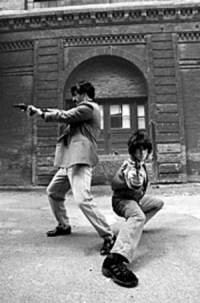 Oscar Madrid and Jim Ousley, the writers of fake-documentary-real-funny-film Hooch & Daddy-O, are not content to rest on their laurels. Because those laurels aren't for sitting on -- they're for building on.

Madrid and Ousley now have plans for a comedy/horror film about a high school janitor who has a Chuck Norris obsession (and aren't we all guilty of that?) and an alien zombie infestation to deal with. Oh, and it's graduation eve, and the janitor's only allies are a group of John Hughes-esque, standard issue high school teens. The Bloodfest Club, currently in development, has already almost-claimed a prize -- that's how good it is.

Ousley and Madrid's script for The Bloodfest Club placed in the top 30 of the Great American Screenplay Competition, and it's a top five finalist for the comedy genre. Contest judges include national critics (boo!) and Troma Entertainment's Lloyd Kaufman and Chris Gore of Filmthreat, two people who clearly know funny and film.

You can follow the progress of The Bloodfest Club at its website, and be sure to click that "soundtrack" link on the site -- it takes you to some sweet, sweet cockrock that should very nicely accompany scenes of alien zombie carnage.

Video bonus: Hooch (Chris Anich) and Daddy-O (Jim Ousley) give you some straight talk about drugs.