Video: A Night at Culver's with Balloon Performer Thad James 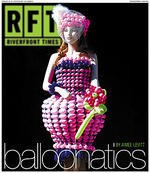 St. Louis balloon artist Thad James is one of the balloonatics profiled by the RFT's Aimee Levitt in this week's issue (which hit many news boxes this afternoon.)
To accompany the feature story, James, who goes by "Sammy J" during his balloon-twisting gigs around the Metro area, allowed us to document a night at Culver's restaurant in south St. Louis County. James works the room, going from table to table for two hours during dinner. Some patrons left tips, others didn't appear to. James said spends about 40 hours a week on his craft, performing at events and parties and practicing jokes and twisting at home.
Here's an excerpt from Levitt's story:

"If you treat it as a business, you get more respect," James says. "People don't think you're a Shriner clown." Twisters, he confides, "are weird about clowns. We accept them because they're there, and we try not to be disparaging about them in mixed company. But when we're done with an event, we can go to the grocery store. A clown has a difficult time doing that."

James considers himself primarily an entertainer. "There's nothing better than finishing and going, Ta-da!" Still, there's art in balloon-twisting, too. "When I'm doing balloons, I look at so many things," he says. "The bubbles have to be the same size. The colors have to go. Mostly what we're doing is manipulating the air."

Once a month James and about twenty other twisters gather at America's Incredible Pizza Company on South Lindbergh Boulevard for a balloon jam. They have been doing this for years, teaching each other new figures, trading strategies for dealing with bratty children and practicing their stage patter.