Puttin' the "Gal" in Galleria

February 02, 2009 at 1:46 PM
comment
It's been observed that bikinis can somehow breathe summer into a cold and meaningless January weekend.

Such was the case Saturday when St. Louis Fashion Week held its first of four casting calls for local models. This one was on the second floor of Macy's at the Galleria.

Events coordinator Rachel McCalla said she was expecting some 350 aspirants, both male and female, to show up and get glamorous in various poses and threads.


The audition shots will get sent to this year's slate of designers, including DIESEL (for their first runway show in the Midwest), Bolongaro Trevor (a European house flying in for their first show in America), and St. Louis' own Lori Coulter.


Once all the models are chosen, St. Louis Fashion Week will kick off Wed., March 25 and run through Sunday, March 29. 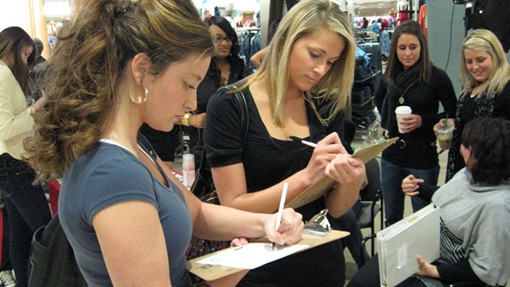