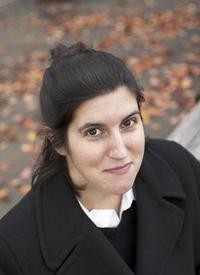 There are plenty of writers this week who are trying to make George W. Bush appear likeable and, yes, even sympathetic. It is his last week in office, after all. But let it be known that Curtis Sittenfeld was there first, and before the Bushes have even left the White House, she's already moved on.

This week Slate will be running a serialized novella by the Richmond Heights author about the Obama inauguration. Installment One of "All Along, This Was What Was Supposed to Happen" went up yesterday, with the remaining four to follow throughout the week.

Sittenfeld's latest novel, American Wife, published last year, imagines how a fictionalized Laura Bush would tell her own life story. Although it moves the Bushes from Texas to Wisconsin and relieves the President of his, shall we say, unique speech patterns, it accomplishes the seemingly-impossible task of turning the Decider-in-Chief into a romantic hero.

OK, so it all goes sort of downhill after that in the next section when the Decider goes into what the tabloids would call a "coke-fueled downward spiral," but I confess, while reading it, I forgot all about the 2000 and 2004 elections and Operation Iraqi Freedom and Guantanamo and everything else that I've raged against for the past eight years and thought, Wow, I like this guy. Later I amended it to, Gee, I wish they'd made him commissioner of baseball instead. I'll bet he'd've been way better than Bud Selig.

"All Along" does not concern the domestic life of the Obamas. (This is fortunate: I'm still a bit scarred from Sittenfeld's depiction of the Bushes' sex life, even though the most detailed parts purportedly took place more than 30 years ago.) Instead it describes the journey to Washington, D.C., undertaken by a woman named Patrice and her elderly Aunt Lettie (who hails from St. Louis -- yeah, represent!), whose dying wish -- although she is not dying -- is to see Barack Obama sworn in as President.

As an extra bonus, Slate has included audio of Sittenfeld reading the novella aloud. But I, personally, am just happy to have something new to read this week to cure my American Wife withdrawal.