Flying well below the radar, Russian poet Yevgeny Yevtushenko appeared Saturday at the St. Louis Children’s Hospital for a reading. 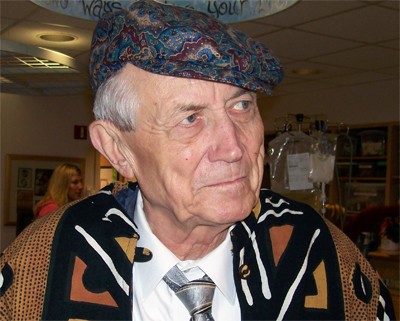 Yevtushenko, da? For the unfamiliar, the septuagenarian is famous for attacking Stalin and promoting artistic freedom, meeting world leaders, including Richard Nixon, and having his work translated into 72 languages.

At 75, he's also a wild dresser. With children and parents gathered around, he arrived at the child life playroom about 20 minutes after 1 p.m. in a colorful coat with blue and brown swirls that looked like flames.

Yevtushenko was accompanied, of course, by Clayton attorney Albert Watkins. Watkins is on the St. Louis Children’s Hospital’s Foundation's Board of Directors. But the relationship between the two dates back to an impromptu seating assignment on a plane 23 years ago.

"I asked him if he was going to clip his toenails next," Watkins said. Nonetheless, after the two started talking, a friendship was sparked. Watkins invited him to stop by St. Louis when he got a chance.

Yevtushenko, who teaches poetry and film at the University of Tulsa and Queens College of the City College of New York, read his poems in Russian.Watkins read them in English.

"I’m like the last of the Mohicans," he declared at the outset, smiling, as the children gathered around stared back at him.

"Every language has some irresistible beauty," he noted at one point. Indeed, during the reading of poems such as "Between the City of Yes and the City of No" and "Tuck Me In" he moved his arm as if conducting a symphony.

"Books are friends which never betray us," he told the small assembly at the end. " I hope God helps you. I love you. God bless you."