One of the greatest delights of blog-world is Frank Warren's Post Secret. Post Secret is an ongoing public art project, wherein Warren invites his readers to write their deepest, darkest secrets on postcards and mail them to his house in Germantown, Maryland. Every Sunday afternoon, Warren culls the best of the postcards he receives and posts them on his Web site.

Over the past four years, Warren has received approximately 250,000 secrets. There are confessions of misdeeds, hypocrisy, loneliness, suicidal thoughts, childhood trauma, existential dread, sexual perversions, acts of self-mutilation and yearning to run away.

There are declarations of love (or not) and remorse (or not). There are threats. Some secrets are heartbreaking. Some are funny. ("I think Richard Simmons is sexy.") Some are bizarre. ("After I put them to bed, I eat the hair of the kids I babysit.") Some come in on plain white postcards. Some are true works of art. The site has received 192 million visitors and spawned four books.

For a nosy person like me, there is a voyeuristic pleasure in reading other people's secrets. Warren, however, sees this enormous outpouring of secrets as a means to do good, as he explained to a crowd of about 200 people Wednesday night at the University of Missouri at St. Louis.

"I think of each secret as a little box," Warren says. "Some secrets get buried deep inside you, like a coffin. Or you can share it with others, like a gift."

Early on in the project, Warren received a card that described a humiliating childhood experience. It reminded him of a similar incident in his own life. When he was in fourth grade, a new kid in the neighborhood convinced Warren's two closest friends to hold him down, pry his eyelids open and take turns spitting into his eyes. Warren had never told this story to anyone, but the knowledge that someone else had suffered through (almost) the same thing gave him the courage to tell his own secret. He found it liberating and wanted others to have the same experience.

"Telling secrets is transformative," he told his audience at UMSL. "Each one of us has a secret that would break your heart. If everyone feels that connection, it would lead to more understanding, compassion and maybe peace in the world."

Warren is a tall, thin man with a toothy smile and an earnest manner. He considers secret-gathering to be his calling in life. He doesn't keep any of the money he earns from Post Secret. Instead he donates it to 1-800-SUICIDE, a suicide-prevention helpline.

At UMSL, where about half the people in attendance -- some of whom had traveled from as far away as Oklahoma and Arkansas -- held Post Secret books on their laps, Warren was preaching to the converted. At the conclusion of his half-hour talk, several people lined up at the microphone in the middle of the room to tell their own secrets.

One of the best things about the Post Secret Web site is its ambiguity. Each secret is presented without editorial comment and the viewer feels free to draw his or her own conclusion about the postcard and wonder about the fate of its creator. Live, that ambiguity was gone, replaced by sentimentality. There's no doubt it's great that the woman who has come out about having the human papilloma virus is now starting her own Post Secret-like project to get people to discuss their feelings about HPV. And it's wonderful that the special ed teacher who doesn't want kids of her own has learned that it's okay. 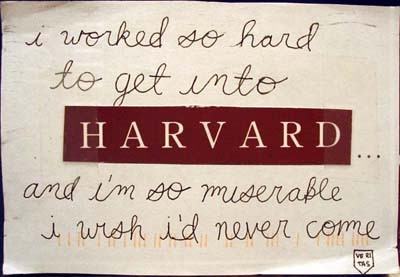 But I remain dubious about Warren's assertion that telling secrets is always liberating.

There's a reason secrets are secret. Especially if you're holding onto other people's secrets. And sometimes, when you've been entrusted with a secret, you're burdened with troubling information that you somehow felt better off not knowing. Maybe that's why people put their secrets on postcards and send them away.

Here are some of the postcard secrets that Warren shared at UMSL:

- "You called me an idiot, so I sent your bags to the wrong destination. Whoops."

- "When I was in third grade I found my mother's diaphragm.
I put it on my head and looked in the mirror and
wondered why she had never told us that she was Jewish...
It wasn't until years later that I found out that she
was really only a Catholic using birth control.
I have never discussed this with anyone." 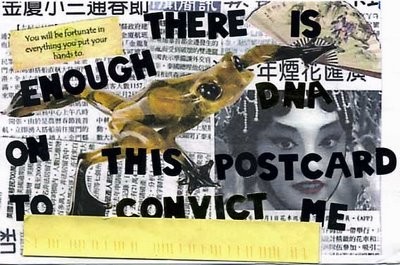