Bleed, Baby, Bleed: The History of Fake Blood in Movies

The blood in horror movies today is deep red, glistening and incomplete without at least a glimpse of dangling intestines.

One need look no further than flesh-and-blood St. Louisian James Gunn, director of 2006's Slither, a down-home B-horror-movie, with its severed tongue in cheek. The blood runs freely, made from a special recipe of chocolate sauce, hot water, corn syrup, red dye and a few secret chemical ingredients to thicken the mixture. The final effect -- as phlebotomists know -- is gruesomely accurate.

Movie blood has not always looked quite so realistic, however. Just as clothes and movie explosions go through trends, blood has changed through the ages. Before color, in fact, it didn’t have to be red at all. Filtered through the black and white lens, it was a shade too light, and brown looked more red than red.

Long before chocolate was invented, D.W. Griffiths was concocting fake blood for his silent films. Even movies without dialogue need blood. Griffith’s Intolerance features some of the first and most gory scenes of early cinema, including gunshot wounds, decapitation and disembowelments. The effects are primitive but still gruesome, especially a five-second shot of a soldier being impaled on a spear as blood gushes almost too quickly and wetly from his wound.

In these early days, the blood flowed freely, but in 1934 the Production Code Administration tied the tourniquet. They censored everything from the sound of a toilet flushing to the sight of impalement. Who can forget the still-harrowing shower scene in Psycho, in which Janet Leigh is brutally murdered to the dulcet strains of a stabbing violin. The blood speckles the draining water and then deluges it, dark and ominous.

Hitchcock notoriously used Bosco chocolate syrup because its dark color was undiluted even in water, all this prompting Janet Leigh to ask for no more Ovaltine, please.

Color ushered in a necessarily new style of screen blood. In Britain, far from the clutches of the Production Code, the Hammer Studio was already dabbling in red. 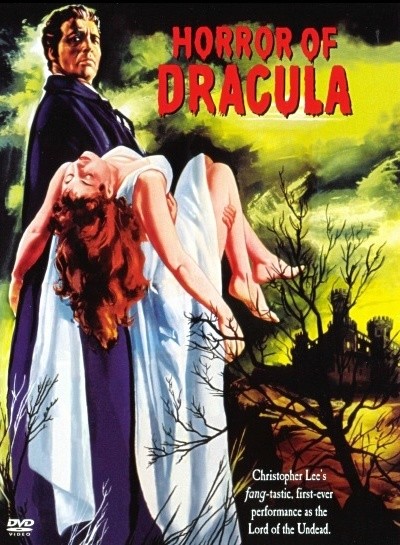 By the late '50s, the studio had dabbled red paint onto everything it could get its fangs into. For its time, The Horror of Dracula was strikingly blood-drenched, with bright red corn syrup dripping over Christopher Lee’s befanged mouth.

As the Production Code loosened its constriction of the vein, the blood began to flow in earnest. The '60s and '70s were marked by bright, arterial red, the kind of blood that comes straight from the aorta to a drive-in theater near you. 1963’s Blood Feast, directed by Herschell Gordon Lewis, is perhaps the first film to have blood as its protagonist, splashing what looks like clumpy oil paint over floors, walls and screaming people.

Blood Feast was no Psycho at the box office, but Lewis' focus on viscera proved popular enough to inspire an entire leigon of Splatter film imitators, anyone from the father of the zombie movie George Romero to torture-porn poster boy Eli Roth.

Soylent Green, while both people and less bloody, features paint-pink blood in its final scene of shocking revelation. Dario Argento’s Suspiria, from 1977, has more blood from a similar vein; it’s an almost orange-red, wet, runny and everywhere. Carrie is doused in pig's blood made from the same type of mixture, but darkened with green, red and yellow food-coloring. 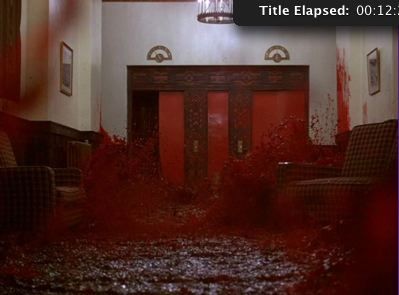 Stanley Kubrick does his best Moses impression in The Shining, though the red sea of blood gushing from the elevator doors is never actually parted. According to IMDb.com, Kubrick, hard to please, took about a year to get this scene right, reportedly dissatisfied with the blood's look on screen. The final shot shows the blood a deep, dark red, with the consistency of water and the aspect of a tsunami.

Blood became commonplace in the '80s with movies by John Carpenter and Sam Raimi adding a clever twist of humor to the often horrifying blood and guts. As special effects got better and filmmakers could make unbelievable amounts of blood pour more believably from teenagers young, taut bodies, the slasher film took over as the place for film fans to fufill their bloodlust. 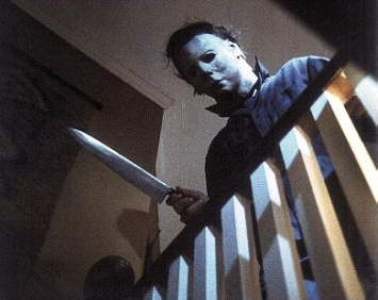 Mainly inspired by the independently funded The Texas Chainsaw Massacre and Carpenter's Halloween, the slasher movies of this time taught studios that they could make crappy movies with a thin plot and less acting talent -- but still turn a huge profit if they bathed everyone in buckets of blood.

Horror movies are not the only bloody fare. War films can spatter just as much, as Steven Spielberg proved in Saving Private Ryan, one of the most gory war movies ever made. Spielberg is no stranger to blood -- he's perpetrated such favorites as the billowing clouds of shark-induced red and Indiana Jones's melting head of wax, latex and corn syrup -- and Saving Private Ryan doesn't shy away from spilling it. Private Ryan's blood is a less saturated red, but stands out against the gray texture of the rest of the film. 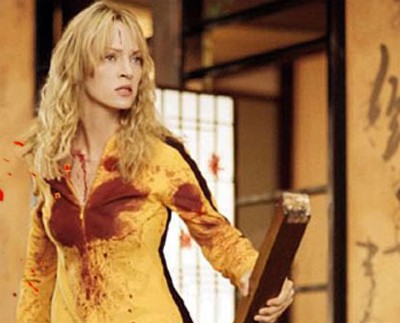 Movie blood today has grown darker and, thicker reaching a realism saturation point. The only exceptions are those with an intentional "throwback" look, like Quentin Tarantino's Kill Bill movies, which reportedly used 450 gallons of the red stuff.

To emulate the sanguine spray found in Asian movies like Shogun Assassin and those of Shaw brothers, Tarantino used blood-filled condoms, so many that he was reportedly forced to use black-and-white photography to tone down the most violent fight scene lest he be slapped with a prohibitive NC-17 rating.

The next trend in screen blood seems to be the faker-looking computer generated stuff -- it's more copious and easier to clean up. 300, for instance, splashes CGI animated blood left and right, saving the $9.99 they might have needed for a mop. While that may work for the bigger-budgeted green-screen fare, nothing brings a thrill like a well-placed splatter of bright red corn-syrup as James Gunn certainly knows. Although his current project (PG Porn, www.pgporn.tv) is slightly less gruesome than his film work -- he's also responsible for writing the Dawn of the Dead remake -- it still uses that good corn syrupy glop that makes our favorite splatter and slasher flicks so delightfully oozy.

And in these uncertain days of high energy consumption, we need all to bleed all the value from corn subsidies that we can.

Make your Own Blood, Slither style! (found on the Slither DVD)