Hydeware Theatre, the avant-garde theater company that become notorious for its 2003 production of Edward Albee's Zoo Story (which concluded with one actor lying motionless in a pool of fake blood until the audience had left the theater), closed up shop earlier this month. It was seven years old. 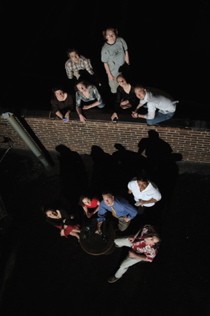 The cause of death was the emigration of founders (and directors and set designers and actors) Ember and Brian Hyde to Seattle.

Hydeware was conceived at Simpson College in Indianola, Indiana, and made its St. Louis debut in September of 1999 with an outdoor production of Macbeth in Forest Park. "Hydeware Theatre is a young, vibrant theatre company dedicated to the pursuit of radically revised theatre, of a theatre that is at once entertaining and enlightening, experimental and simple, luminescent and dark," the founders wrote in the mission statement that (still) appears on Hydeware's website.

During each of its seven summers, Hydeware performed Shakespeare in a park (first Forest, then Tower Grove), including a gender-bending Taming of the Shrew in 2004 and a revisitation of Macbeth in 2007, which RFT theater critic Paul Friswold praised for its inclusive spirit. "This boisterous, everybody in the house element is mostly lost these days. Shakespeare has become Theatre, and it's no place for the groundling," Friswold wrote. "[Director Richard] Strelinger and Co. have made room for the groundlings in their Macbeth, however -- and that's not just because we're all spread out on the asphalt in front of the stage eating and drinking in true 17th century-audience fashion."

Hydeware's production was so mesmerizing that kids playing in the park stopped what they were doing to watch.

Indoors, Hydeware specialized in 20th- and 21st-century plays so cutting-edge that advertising occasionally became a problem, as in the case of 2004's Poona the Fuckdog: And Other Plays for Children, by Jeff Goode. (RFT critic Dennis Brown, the only writer in town who was able to use the play's full title, described it as "a unique evening of bizarre nonsense…like a freshly uncorked bottle of Champagne that never goes flat.")

Like most other theater companies in town, Hydeware struggled to find a permanent home and a dependable source of funding. Other struggles were more theater-related: Three weeks before its five-hour production of Eugene O'Neill's The Iceman Cometh, the leading man dropped out because he couldn't learn his lines and Brian Hyde had to fill in.

Hydeware's final show was The Caucasian Chalk Circle by Bertolt Brecht at the Ivory Theatre in Carondelet this past spring.

Survivors include The NonProphet Theater Company and New Line Theatre of St. Louis and Hyde Insulation of Des Moines, Iowa.