I like to think this Monday morning post serves as a casual "how was your weekend?" greeting to those of you who are returning to work after another two-day staycation (the last time I'll ever use that word, promise) in St. Louis.

Here's what you may have missed over the weekend: Debate Hangover 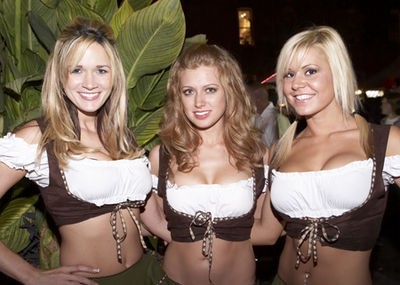 Friday was all about post-debate analysis in all forms -- the RFT was at said Veep Debate -- so catch up with our coverage at blogs.riverfronttimes.com/stlog/veep_debate_08. We also posted a slide show of Sarah Palin's post-debate rally at SLU , which shows all those by-now stale Palin cliches, hockey moms included.

Slide Show On Friday night, the Soulard Oktoberfest, held over the weekend at the Soulard Market at 8th and Lafayette Street, got underway with lots of beer, and in the spirit of that other Soulard festival, boobs.

Artist Jason Hackenwerth creates balloon sculptures that are far removed from what you may remember from childhood birthday parties. Jamie L. Oetting was at his exhibition's opening Friday night. The former clown-for-hire clearly took his balloon-bending skills to new levels.

And finally on Saturday, the Chicago Cubs continued their playoff mediocrity, giving jilted St. Louis Cardinals fans something to cheer about this October.

Here's what not to miss this week.