About the Cover: Lipstick on a Pit Bull Meets Tricky Dick Nixon

1968. Vietnam. The assassinations of RFK and MLK.

Richard Nixon, the Republican nominee, was battling Lyndon Johnson's Vice President Hubert Humphrey for the Oval Office. The conventional wisdom said Nixon had narrowly lost 1960 contest to John F. Kennedy due, in part, to his appearance during that election's first-ever televised debates. Where JFK was handsome and telegenic, Nixon had a five-o'clock shadow and was sweaty.

So leading into the '68 debates, George Lois, legendary art director at Esquire magazine, concocted an image of multiple hands giving "Tricky Dick" a cosmetic once-over, tagged with the cover line "Nixon's last chance. (This time he'd better look right!)" Nixon won that election and the next one in '72 only to resign the presidency in disgrace as a result of the Watergate scandal.

40 years later. The waning days of another disastrous Republican administration.

GOP VP nominee Sarah Palin referred to herself as a "pit bull in lipstick" during her acceptance speech at the Republican convention. What could be more appropriate on the eve of the Vice Presidential debate in St. Louis than to update the image for our times as well as pay homage to Lois' groundbreaking work?

View the '68 Esquire cover and the '08 RFT cover after the jump. 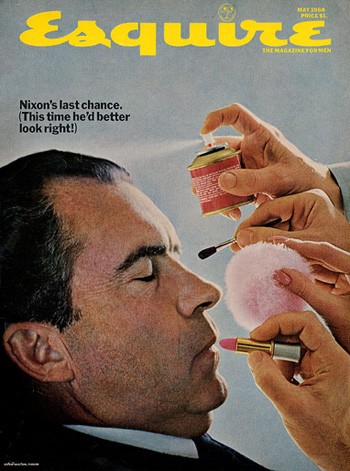 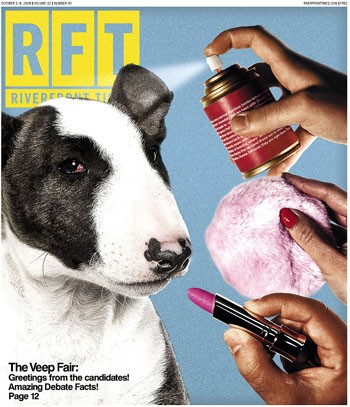