Hal Holbrook’s Samuel Clemens, or known globally by his pseudonym, Mark Twain, appeared Saturday night in the requisite white suit with thick white hair, a mustache, and a stogie that didn’t burn until the second act.

A mischievous plume of smoke from the side of the stage reassured the audience he was coming back for more -- a reassurance that was greeted with appreciative applause. 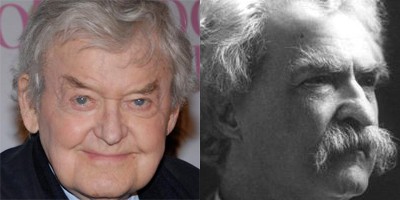 Holbrook, left, in December 2007. Twain, right, in this undated work.

It was loud, as can be expected from the 1,200-seat, packed house at the Lindenwood Center for Fine and Performing Arts in St. Charles.

Holbrook, now in his early 80s according to his bio, has been awarded a Tony for his performance as the great American writer, who famously hails from Hannibal and is best known for his popular stories, among them the legendary The Adventures of Huckleberry Finn and the adventures of a fictional Tom Sawyer.

As popular as Twain remains, the crowds Holbrook attracts on his tour around the country probably owes at least in part to the show’s longevity -- a tour that began nearly 50 years ago when Holbrook took his show off-Broadway.

Pacing back and forth on stage, the mostly irascible, and at times somber performance covers everything from Twain chasing gold in California to his tips on dealing with interviews: "Say one fact, then one that immediately contradicts it, and smile like an idiot."

Holbrook's Twain is talking to the audience in 1905, when the writer is in the twilight of his life, and more than happy to denounce politicians, and really politics in general: "Washington is a stud farm for every jackass in the country."

When he talks about a newspaper report that recounts President Teddy Roosevelt shooting a bear, Twain says: "He could have stayed home and shot a congressman.”

Other great zingers, in reference to humanity and religion: "Sometimes it seems a shame that Noah and his party did not miss the boat."

"Man started out lower than the angels. He's been getting lower ever since."

At one point in the performance he reenacts passages from The Adventures of Huckleberry Finn, including an intoxicated performance of Pap, Huck’s father, which was hard to hear and understand unless you have read Twain.

He says he never exercises because he never saw "any benefit in being tired."

As far as drinking goes, Twain lives by the maxim: "When others drink, I like to help."

For parting advice about how to live a long life, he leaves us with: "Never smoke more than one cigar at a time."