Where: The Schlafly Tap Room parking lot, 2100 Locust Street. What: A Zombie Movie Double Feature, courtesy of Cinema St. Louis, Front Yard Features and Schlafly Beer. Better Than: A bucket of (fake) blood to the face.

It was a slow start last night when Cinema St. Louis brought out the locally made and produced films Blind Cat Black and Song of the Dead.

The Annual Shriners parade was slowly winding down a few blocks over and the crowd was small at first. Things picked up closer to show time, with a gang of folks showing up with blankets or lawn chairs to sit in a parking lot of Schlafly's Tap Room and catch a zombie double-feature. 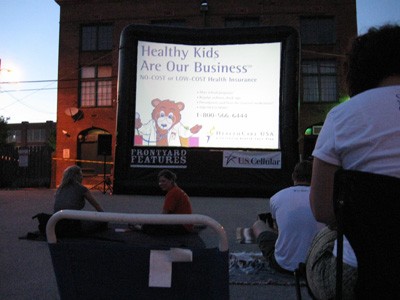 The thing is, you can't really call Blind Cat Black a zombie movie. The film was more an art film about sex, prostitution, death and the circuitous nature of life. Plus there were about a half-dozen zombies and no brain eating.

It did feature several local musicians, including Tory Z. Starbuck, and local hangouts, including the bar at CBGB on South Grand Boulevard.

And yet, the film was silent. No dialogue, save for the narration, which came in the form of a translated Turkish poem, read aloud by a half-dozen people and set to a varied musical backdrop.The poem had little if anything to do with the action on screen.

What's worse is the film didn't make any kind of sense. Scenes ended before they began, characters weaved in and out of the narrative with no real impact on the story and the film felt like it lasted an eternity. You could call it Lynchian, but I think David Lynch fans might take issue with that.

Of the two, Blind Cat Black was the worst received, earning a rousing ''Thank God!'' when the credits rolled, from someone sitting in the audience.

The crowd doubled in size when Song of the Dead started.

The writer/producer/director, Chip Gubera , introduced the film and promoted his newest feature, Academy of Doom which will be part of the St. Louis Filmmakers Showcase this month.

Song of the Dead began, as a lot of zombie movies do, in a graveyard. In a loving nod to George Romero's Night of the Living Dead the scene has the predictable zombie attack and subsequent chase. All par for the course, right?

Well, what sets Song of the Dead apart is its music. Surreal, enchanting and oddly catchy, the songs in Song are what keep the story rolling.

The President (played by horror vet Reggie Bannister from the Phantasm movies) delivers a song about stopping the zombie terrorists, as a star-spangled hype man might, all glitter-y suit and dancing bodies behind him. The survivors, holed up in a cabin in the woods (didn't see that one coming, did you?) sing songs of hope and despair while the undead sing about wanting their brains.

What Gubera did was to take a zombie film's essential elements and add rock numbers, much like Richard O'Brien did with Rocky Horror Picture Show, a comparison echoed by many in attendance. In doing so, Gubera achieved a strange feat: He made a zombie musical with heart.

When the film ended, the crowd cheered. Fans purchased DVD copies direct from Chip and he talked excitedly about the movie and how it was made.

In 2004, when the film was produced, there were issues with the Screen Actors Guild, so Chip and company sought non-union thespians to fill the roles -- some local, some regional and some from L.A. After two years of post-production, the film started to make the rounds of the festival circuit.

Song has since won three awards: - Best Feature Film at Filmmakers Jubilee in Kansas City - Best Music at Cine Fantastico y De Terror in Spain - Audience Choice at the Rojo Sangre in Argentina, where it narrowly beat out Oscar Nominee Pan's Labyrinth. Chip also noted that those who want to can find a copy online at songofthedead.com.

The parking lot emptied as quickly as the plastic beer cups and the night once again belonged to the living.