The last weekend of June, 2008: We'll look back and remember great weather, the Cardinals taking two of three from the Royals, and underwear parties. And PrideFest STL, and a wild night downtown, and Rancid's show at Pop's.

Photos: STL at Night On Friday night, roving photographer Jason Winkeler took to the streets with his camera. See what you missed at the Big Bang Piano Bar, Big Daddy's, Rue 13, Flamingo Bowl, and out on the streets. He filed these nightlife photos from Laclede's Landing and Washington Avenue. 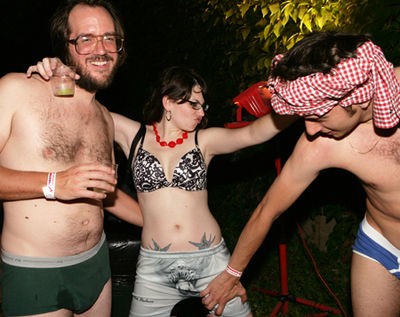 Tightey-Whitey Party at White Flag Projects On Saturday, White Flag Projects, the city's alt art gallery, invited a few hundred people to its tightey-whitey party. Though the actual tightey-whiteys were few in numbers, people got creative with their underwear. Photographer Steve Truesdell was there. We've posted a few photos. Writer Jeanette Kozlowski has a review, and a list of the Top 5 Best undressed Party goers.

Rancid at Pop's on the East Side Also on Saturday, arguably the country's most popular punk band, Rancid, returned to St. Louis (well, Sauget, Illinois) to play a sold-out show at Pop's Nightclub and Concert Venue. More than 1,500 people crammed into Pop's for the show. We've got a review of Rancid's show and Todd Owyoung took photos of the Rancid show and the people in the crowd.

Here is what's going on this week in our Calendar section.