What: Mike Siculan and family present an exhibition of authentic sideshow banners from the glory days of the Midway. Where:The Historic Firehouse, 3555 Salena Street, St. Louis Better Than: A third season of ''Carnivale''

Last night, The Historic Firehouse on Salena in the Marine Villa neighborhood was treated to a showing of some of the oldest sideshow banners in existence, some dating back to the 1930s. In those times, at the intersection of history that's both pre-television and post-industrial revolution, suckers were ripe for the picking. Garish, vivid art called out from the midway to come see the sideshow.

The product of little funding and tight deadlines, the art of these sideshow banners is at once grotesque and beautiful – contorted childish drawings, simplified human forms and canvases stretched to mammoth proportions. The combination of fading paints, dusty, folded canvas and the art brut that graces them is so authentic you can almost smell the funnel cake.

Local sideshow art expert and curator, Mike Siculan got started with collecting this brand of American art with his brother Tom after purchasing the estate of storied banner painter Jack Sigler. This fueled the brothers' passion, leading them to purchase as much of the art as they could get their hands on.

''A lot of these are Johnny Meah'' Mike said Friday night. Meah, he explained, was a legend of the genre, who now paints for Neiman Marcus, but who did a stint as technical supervisor on HBO's sideshow drama ''Carnivale.''

Most of the paintings make reference to their subjects being ''ALIVE!'' Mike said that the customer would pay more for live acts than they would if it was a dead body. The most common form of a non-alive act was a baby in jar. While shocking today, this was an accepted practice in the sideshow industry. They even had a name for it: ''pickled punks.''

It would seem Mike is a sideshow attraction all his own: call him The Amazing Brain. He seems to know almost everything there is to be known about sideshow history and listening to him expound on the history of the sideshow is an exhibit worth every penny. 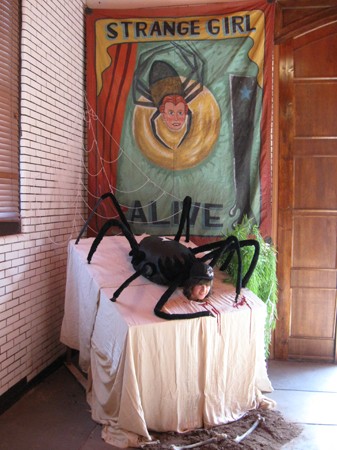 There's other sideshow art, including an old truck loaded with figures from an old crime show - ''Machine Gun'' Kelly shares a ride with Charles Manson while Warren-Beatty-as-Clyde-Darrow rides shotgun. It's a companion piece to the St. Valentine's Day Massacre painting, all cartoonish gangsters bloodied and perforated with bullet holes.

A few hours into the show, a converted fire truck truck rolled up to the entrance. The ''Fire & Ice Truck,'' owned by Scott Pondrom, serving ice cream and snacks, was almost an exhibit all its own. Pondrom's mobile feast is a full-fledged business for his company The Design Deli – the truck rolls to parties and art openings and is a fully licensed eatery.

The audience was sparse but appreciative, they took their time and let the art soak in. There were some local figures, like Way Out Club co-owner Bob Putnam, mingling with punk rock kids and curious neighborhood folks. The crowd gained momentum, building as the night went on, until the event shut down at midnight.

Both Tom and Mike seemed genuinely surprised when a customer would appear, the opposite of old carnival barkers, whose hyperbolic pitches played on a stereo in the main room. ''We never expected to have any attention,'' says Mike, looking through the front door into a half-full room, ''I don't know what's going to happen to this afterwards.''

Across town at Cicero's, there was a performance by 999 Eyes, who billed themselves as the ''last genuine traveling freak show'' in the U.S. Their act was half Vaudeville and half sideshow -- the freaks were not just objects, but performers who told jokes and did amazing feats.

Both 999 Eyes and Mike Siculan prove that the call of the sideshow is as potent as ever.