"Once you make a balloon dog, you can do anything" earnestly promised several balloon-twisting members of Twisted: A Balloonamentary on Wednesday night.

The documentary features the lives of eight, semi-pro balloon-twisting competitors, including a religious fanatic, a few shrewd entrepreneurs, a medical student and a cancer survivor. Balloonamentary follows their participation in ''The Twist and Shout,'' an international balloon-twisting convention in Cerritos, California.

The final showing is Thursday (tonight!) at the Tivoli.

The Tivoli on Wednesday was equipped with a balloon-twisting promotional booth in the lobby for moviegoers to try their hand after the show, as well as a handful of playful balloon sculptures. 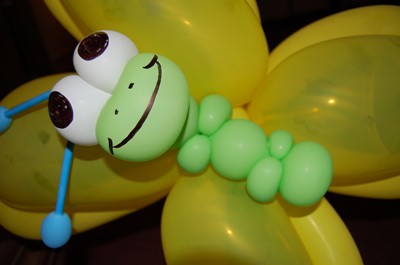 One hour (and about four balloons) later, I’d stopped smirking at what I'd perceived to be their “you can do anything” naiveté.

It turns out that twisting a balloon into the shape of a dog, or at least their featured dog, a purple poodle-ish contraption, requires a certain sensibility (not to mention patience, diligence, a gentle touch and an enormous sense of fun).

Captain Hook
As for twisting balloons for a living, now that takes the lunacy of love. Washington University students Naomi Greenfield and Sara Taksler lead moviegoers into a realm of real-life Napolean Dynamites who all find their groove (and their subsistence) twisting balloons into something unlikely.

To see these gloriously absurd characters prevail life's tribulations -- not just the mundane, but poverty, poor health and even death -- is to be unexpectedly reminded of life's infinite possibilities. And that's exactly the sort of thing Greenfield and Taksler say motivates them to create more.

While the 7 p.m. show Wednesday night was sparsely attended, I may have laughed long and loud enough for the whole theater.