Last Night Review: Kids in the Hall at The Pageant

It's been six years since The Kids in the Hall went on a live tour. On Tuesday night, the five-person Canadian sketch comedy troupe packed The Pageant in the Delmar Loop, bringing out new material and classic characters from their eponymously titled television show.

While you're at, read our recent interview with troupe member Mark McKinney.

At 8:30 p.m sharp, the house lights went down and the group took the stage. At first look, it was clear they looked different than they did when the TV show premiered in 1989. But their sketches and were the same bizarrely funny, unabashedly gay, sometimes drug-fueled scenes full of everyday moments gone terribly awry.

The stage lights went up and so did most of the audience. Many in the floor seats at The Pageant stood up and applauded and whistled. This was definitely a super-fans audience, more than 1,200 of them. The familiar theme song (''Having an Average Weekend," by the Canadian band Shadowy Men on a Shadowy Planet) came over the house speakers and a pre-recorded video of the Kids sitting around trying to think up sketches for their new tour played (“Hey, I got it, let's rape Kevin!”) to warm up the crowd.

Here's a sketch-by-sketch rundown of the show: 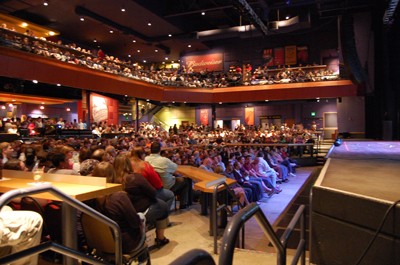 Hateful Baby The first sketch has all the Kids in the Hall -- Mark McKinney, Bruce McCulloch, Scott Thompson, Dave Foley and Kevin McDonald – on stage for a scene about a couple giving up their baby.

Buddy Cole Scott Thompson shocks them early with talk of Jesus as a gay man.

Gut Spigot An SUV powered by gut fat? Yes. Mark McKinney as a suit-wearing salesman to his partner, Bruce McCulloch: ''Are you telling me that America's dependence on foreign oil depends on what lies underneath the tent-like dresses of those girls we finger-banged in Texas?'' ... ''Take that, McDonald's!''

Time Machine This was a reoccurring sketch, beginning with Foley and McDonald as two guys at last call. Foley goes back in time to get two beers. ''I have made last call my bitch.''

Gavin Bruce McCulloch's character returns, this time to greet two Jehovah's Witnesses at the front door. As it was improv, a video projection of a living room was their backdrop. The foul-mouthed kid is as funny as ever. One joke revolves around the inventor of Gatorade dying slowly in the hospital. He receives a Gatorade shower ''as the seconds were ticking down – in his life.''

The Cathies Scott Thompson and Bruce McCulloch as working-class middle-aged ladies in a fancy restaurant catching up on old times. It appears McCulloch's character loves crystal meth. She orders a bowl of ice – her teeth are falling out.

McKinney monologue Try taking out your contact lenses with only your thumbs.

Car Fuckers (Video Segment) This was the first video segment of the night, which just as easily could have been a lost scene from one of the television episodes. McDonald plays a female customer at an automobile repair shop. The female customer looks on in horror as the mechanics are gang-raping her...car. ''Oh my God, you're a bunch of car fuckers, aren't you?!'' The next part of the sketch shows Dave Foley as Henry Ford in an old-timey filmstrip, where the automaker talks about ''the Jews.''

Imaginary Girlfriend Dave Foley and Kevin McDonald are two friends who are love with the same imaginary woman.

Foley: ''I think my imaginary girlfriend is cheating on me.'' McDonald: Are you crazy? Camille wouldn't do that.''

Chicken Lady A working class Scott Thompson calls a love hotline and gets Mark McKinney's Chicken Lady on the other end of the line. This got rousing applause as the stage lights went all the way up as McKinney walked on stage.

BJ on your B-Day Bruce McCulloch and Dave Foley sitting side-by-side on chairs with a blanket over them. Think about it.

Two Gay Couples A gay couple played by Foley and Thompson, visit the home of their friends, who are also gay, played by McKinney and McDonald. Where's McCulloch in this scene? Well he's the Swedish Girl, also a character from the television show.

The Way We Danced One of the funnier and more active sketches of the night, it simply shows the five showing what they danced like in grades eight through eleven (well, they didn't dance in eleventh grade, they were too cool. But Thompson, of course danced in eleventh grade, he knew he was gay). Hilariously funny and actually heartwarming!

Time Traveler Dave Foley, as the drunk, uses his time machine to go back in time and have a beer with Hitler. The drunk also inadvertently may have given Hitler a notion about, again, ''the Jews'' by mentioning them to the art school-aged, future dictator.

Super Drunk As ''Super Drunk,'' McCulloch and his sidekick the Bartender (Foley, ''We've got justice...on tap!''), stop muggers and terrorists.

At 9:53 p.m. the theme music again came on and was greeted by rousing applause. But the show wasn't over just yet.

McCulloch, joined by the other four members of the troupe, said, “Sorry the show got started a bit late tonight, Scott's dope arrived late. Who knew a Tuesday night in St. Louis would be so much fun?''

The group left the stage and for the encore-and-finale, McKinney recreated one of his – and the show's – favorite characters: Mr. Tyzik a.k.a Headcrusher. He subsequently crushed all the heads of his cast mates and them himself, all the while holding a video camera which had its images projected on the large screen on stage.

Ten minutes later and the show was over. Though the crowd appeared to be full of die-hard fans, the content of the the show was on par with that of their television show.