Q&A with Mark McKinney of Kids In The Hall

Thanks to the writers' strike, the Canadian sketch-comedy troupe The Kids in the Hall is on tour for the first time in six years. As stars of an eponymous television show that aired on HBO from 1989 to 1995, the Kids bestowed upon cable-watching American geeks and potheads such characters as Buddy Cole and Mr. Tyzik, a.k.a. ''The Headcrusher.''

The five cast members went on to act and write in television and movies. Notably, Bruce McCulloch directed Superstar (Molly Shannon) and writes for ABC's Carpoolers. Scott Thompson keeps the character Buddy Cole alive on his blog. Kevin McDonald was the voice of Pleakley on the Lilo & Stitch series. Dave Foley starred in NewsRadio. Mark McKinney acted on Saturday Night Live and created the mini-series Slings and Arrows.

The Kids will appear May 20 at The Pageant. Riverfront Times staff writer Kathleen McLaughlin interviewed McKinney from Los Angeles.

McLaughlin: The sketches you'll be performing are all new. When did you have a chance to get together and write?

McKinney: ''We did a show a year and a half ago in L.A. One week were all in L.A. at the same time. We said, 'Let's do a show the way we used to in the clubs. (The troupe started writing on Monday and performed on Friday.) ''We used to write that fast. We thought it would be fun. We came up with some really good stuff.

''Then the writers' strike happened. [We thought], we've got this show in a box now, and no one''s working, so everyone got clear.'' 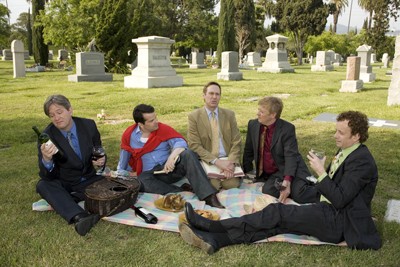 What's different about The Kids in the Hall, now that you're older?

''There's a little bit of stuff about parents, which I think we wouldn't have written ten years ago. But it's still the same thing. Whatever makes the five of us laugh gets on. It can be pretty weird and bizarre, and anarchic as the stuff we did in the clubs.''

''Yes, he makes an appearance. I don't want to blow it because it's a fun part.'' (McKinney says Buddy Cole also has a brand-new monologue.)

Who's been coming to the shows?

''There's still a bunch of 18-year-olds showing up. That baffles me. [Then again,] I saw Monty Python for the first time after it went off the air.''

You think Monty Python is funny?

''Yes, I do. If you watch Life of Brian, you've got to admit, there's something funny going on.''

How would you describe KITH to the uninitiated?

''There's certainly enough of it. It sort of will. I think people know that The Kids in the Hall are Canadian, but it's not a leap across the cultural divide.

In Canada we get people saying, 'We really like the show, and it makes us proud to be Canadian.'''

What was different about being on Saturday Night Live?

''Well, it wasn't my show, you know what I mean? It was a bigger American show. That's the way I experienced it as a little Canadian boy.

''It was harder for me to do the weird character stuff. I was also a new dad. Saturday Night Live -- it should be the first time you work in television, or almost the first time, so you can throw yourself into it.''

Did you notice a difference between the network censors in Canada and the United States?

''We had one sketch that was a real big deal, called ''Dr. Seuss Bible.'' We told the crucifixion story as Dr. Seuss characters. I think that was cut out – by HBO. Now it wouldn't raise an eyebrow.''

You mentioned that the five of you are contemplating a new project. Would that be on television?

Where would the Kids fit into the current generation of comedy?

''We sort of caught the beginning of the cable revolution, where you could do weirder, more interesting things, and you didn't have to have an audience of 30 million people a week to justify it. Now there's a new break, the Internet.

''So yeah, I think shock value is somewhat diminished, but I don''t think that's what we lived on.''