It has been a wild few days for freelance photographer Nichole Torpea. The 22-year-old UMSL grad was shooting the My Chemical Romance concert at the Pageant for Riverfront Times this past Saturday night when, she says, she was assaulted by a member of the band's security team. 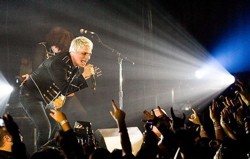 RFT freelancer Nichole Torpea didn't shoot this pic of lead singer Gerard Way in action at a My Chemical Romance concert.
But she'll be shooting an MCR concert again this Friday at New York City's Madison Square Garden -- as a special guest of the band.

While taking pictures from the balcony of the Pageant during last Saturday's sold-out show, Torpea says, she was approached by a man she believes is a member of MCR's security team. The man, whom she later described to St. Louis police as six-foot-three, 210 to 230 pounds and dressed all in black, grabbed her arm, led her through a door to a stairwell and forced her to the ground. Torpea says the man paid little attention to the photo pass attached to her shirt.

"I was collapsing under his pressure," she says. "I had no idea what was going on. He had no ID and wouldn't tell me who he was. He kept saying, 'You know what you did. Give me the fucking camera.'"

Michael Mitchell, venue manager of the Pageant, says he and his employees were shocked when they arrived on the scene. "My first concern was their safety," says Mitchell. "They were headed for the stairs. I jumped behind them and pushed them toward the landing. Both my heels were dangling over the top stair."

The confrontation ended seconds later, after the man ripped the camera from Torpea's body and fled down the stairs. He returned several minutes later and gave back her camera, having deleted all the images on the memory card. His parting words: "You'll never work for MCR or [the band's label] Warner Bros. again!"

Mitchell says he's still taken aback. "Three members of our staff, including me, witnessed it," he says. "Combined, we have over 50 years experience in security and nightclub management. None of us had ever seen anything approaching the degree of unprofessionalism portrayed by their guy's actions."

Torpea, who was treated by the nightclub's medic for an abrasion to her arm, says she blacked out momentarily after the incident, owing to hyperventilation. Two hours after the show, at the suggestion of Riverfront Times web editor Nick Lucchesi, Torpea called police. By the time an officer responded to the scene, the band had packed up its tour bus and left town.

Luke Burland, head of press for Warner Bros. Records, says the New Jersey-based band was unaware of any incident until being contacted yesterday by RFT. She declines to speculate on the identity of the alleged assailant. "The band is definitely looking into it and will take appropriate action," the publicist says. "They feel horrible about this. It's not who they are. They want to make amends."

The group's raucous, punk-inspired music and angst-filled lyrics have translated to album sales in the millions since MCR hit it big in 2004. Despite the hardcore image, the band maintains a squeaky-clean image and a reputation as being exceptionally fan-friendly.

"Five geeky outcast dudes," is how lead singer Gerard Way described MCR in a 2006 interview in Alternative Press magazine. In YouTube videos, the band expounds not on the clichés of sex, drugs and rock & roll, but on its respect for women and what its members see as their mission to save the lives of their teen- and college-age fan base.

Burland notes that it's common for bands to allow press photographers to shoot only during the first three songs of a concert. Still, she hastens to add, that's no excuse for the way Torpea appears to have been treated. "The band would never condone that behavior," the publicist says.

Torpea says she now realizes she was in violation of the agreement she signed in order to obtain her press credential. "I misunderstood it," she says. "I thought the rule applied only to photos near the stage. I didn't realize it extended throughout the club and on the balcony."

Torpea says some of her friends had been pressing her to seek legal recourse before she got a call late Tuesday night from MCR's manager. "He said the group had no idea what happened and they are sorry about anything that may have occurred," Torpea reports. "They want to make it right and have invited me to come see them in New York."

The photographer had some initial misgivings about the band's offer to fly her and her boyfriend to Manhattan but ultimately decided to let bygones be bygones. "Essentially I was looking for an apology," she says. "Last weekend was pretty crappy. So if they're going to make it up to me with a good weekend, I can't complain."

And what if during the concert she comes across her alleged attacker? "I'll probably just say: 'Hey dude, thanks for the free trip to New York.'"