I'm pretty damn sure Tim Heidecker knows karate; for Christ's sake, he held his breath for thirty minutes. If that doesn't say karate master, well, then you must know something I don't. 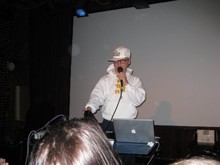 The sold-out show
That needs a bit of background, I suppose. Tim Heidecker and Eric Wareheim were kind enough to grace St. Louis with their presence Monday night, or at least grace the capacity crowd at Off Broadway with hot dogs, pizza and vomit. Many of you will know those two from their show Tim and Eric Awesome Show, Great Job! which airs on Cartoon Network's Adult Swim, or from their previous show Tom Goes to the Mayor, also on Adult Swim. Their comedy has been likened to the works of Andy Kaufman and Monty Python due to its absurd nature.

Tim and Eric Awesome Show lampoons the types of terrible programming one would see on public access channels in any American city, and throws in heavy doses of the surreal and non-sequiturs. Tim and Eric have also delved into the commercial plugs, working on viral ads for Papa John's Pizza, Absolut Vodka and Shrek. The viral marketing has more than a hint of sarcasm and revels in discomforting common social settings, if a common social setting for you is sitting around in bathrobes arguing over vodka with three of your friends.

The show Monday night was peppered with sketches from the television show, as well as peeks of things to come in Season Three. Papa John's pizza was thrown into the crowd, and I'm pretty sure I'll be picking Tim's fake vomit out of the hood of my jacket for the next few of days. Throughout most of the show, both Eric and Tim wore skin-tight leotards or some type of Spandex shorts, and let's just say there were some tightly wrapped packages on stage. Eric won as far as the packages were concerned, sorry Tim; though there was no official contest.

DJ Dougg Pound
DJ Dougg Pound performed first, adding to the multimedia extravaganza with his hot remixes. The hamburgers and hot dogs sketch was ridiculously funny, though unfortunately left Off Broadway reeking of the hot dogs that were thrown into the crowd and subsequently smashed into the carpet. Still, the dynamic of the two is best represented, I believe, in the karate sketch: in which they sing a song about being best friends and never lying to one another. Perhaps I have a soft spot for high-kicks in Spandex.

After the show, the guys stuck around for a while, had a few beers and talked with their fans. I had the opportunity to ask them a few questions, and there was so much I wanted to ask: ''where do you get your ideas,'' ''what are your favorite foods,'' '''what's your perfect Sunday,'' ''which New Kid did you think was the cutest;'' the list continues.

But, I decided to stick with the basics; I asked them for dating advice.

Tim: ''I just had sex with a 12 year-old girl. Don't worry it was consensual; I worked out a deal with the family, it's complicated.''

Eric offered up this gem: ''Show her your balls on the first date, that always works.''

Needless to say I'm taking this to the bank and hitting the clubs; look out St. Louis.

On a more serious note they both stated that the tour was going amazingly well.

That's it for now; I'll leave you with this piece of Tim and Eric wisdom: I like party, I like fun, I want to live in a hamburger bun.