No wreaths were on display yesterday at Dave Mungenast's Classic Motorcycle Museum in south St. Louis. No maudlin chamber music played in the background. Still, the significance of the day was not lost on aficionados of motorbikes and Burt Reynolds movies.

"It's pretty much business as usual here," says museum director, Dave Larsen. "But yeah, the anniversary did not go unnoticed."

A year ago yesterday, on September 20, 2006, Dave Mungenast Sr. died of brain cancer at the age of 71. Most St. Louisans will recognize Mungenast as the man whose family of St. Louis auto dealerships still bears his name. But more than a car dealer, Mungenast was an accomplished motorcyclist. His museum on Gravois Road provides testimony to his racing legacy and the incredible collection of bikes he collected along the way.

Fewer people know that Mungenast was also a screen legend. In the late 1970s and early 1980s, he appeared in a handful of feature films as a stuntman or actor. The most famous of those movies was the 1981 car-race comedy Cannonball Run, in which Mungenast plays the leader of a motorcycle gang who picks an ill-advised fight with a young Asian actor by the name of Jackie Chan. Internet movie database IMDB succinctly credits the car dealer as "Dave Mungenast Sr.: Kicked by Jackie Chan (uncredited)." 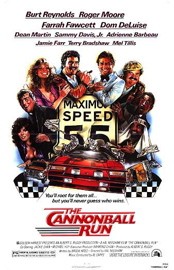 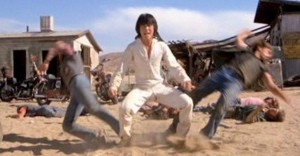 Car dealer Dave Mungenast Sr.'s legend lives on in celluloid. In Cannonball Run Mungenast plays a motorcycle gang member who gets a whuppin' from a young Jackie Chan.
"He did all his stunts himself," recalls museum director Larsen. "He was a remarkable athlete. Whenever they needed someone for a motorcycle stunt, Dave was on the top of the list."

In 1978 Mungenast played a motorcycle cop in Hooper, a movie that, like Cannonball Run, also featured Burt Reynolds. In the film, Reynolds' character hooks a chain around Mungenast's belt and drags the stuntman from the back of a motorcycle. Other Mungenast film credits include the 1984 Paul Newman film Harry & Son.

In 1985 Mungenast performed a stunt for the pilot episode of Welcome to Paradise in which he launched his motorcycle off a pier and into the ocean. The show never made it to television, but Mungenast's death-defying stunt earned him a nomination -- at the age of 50 -- for Stuntman of the Year.

"What was so ironic about his death was that Dave was a physical-fitness nut," laments Larsen. "I'm ten years his junior and I always thought he'd be a pallbearer at my funeral. It's a shame. The man was a legend."