Missouri Cannabis Industry Adds More Than 4,000 Jobs as Others Struggle to Hire 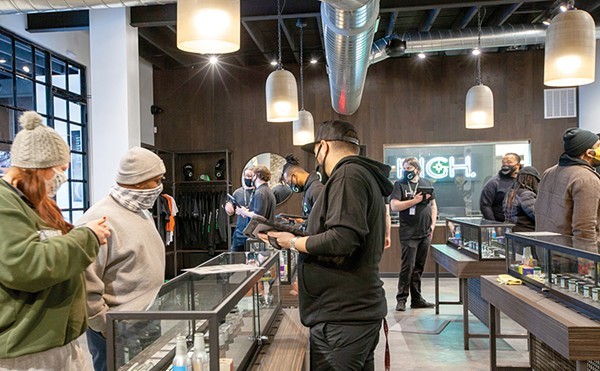 Even as employers all across the state and nation struggle through a labor shortage — particularly affecting the hospitality sector — Missouri's medical marijuana industry has added more than 4,000 new jobs in less than a year.

According to a report this week from the Missouri Medical Cannabis Trade Association, or MoCannTrade, the Missouri Department of Health and Senior Services has to date issued some 4,584 state agent ID cards, which are required to work in medical marijuana facilities. That's up from just 200 IDs issued back in September 2020, when the local cannabis industry was still in its infancy (the first dispensaries in the state opened the following month, in October).

And according to data released Friday by the Missouri DHSS, the majority of licensed medical marijuana facilities in the state are now approved to operate, with 235 out of 380 cannabis companies receiving approval. Those numbers include 140 out of 200 authorized dispensaries now approved for operation, as well as six testing labs and 29 cultivators. Naturally, all of those facilities need employees, leading to the boom in ID cards.

All this hiring success comes in stark contrast to the troubles faced by other industries in the St. Louis area. A St. Louis Post-Dispatch article this week notes that the metro area is tens of thousands of jobs shorter than it was at the start of the COVID-19 pandemic, despite a flurry of hiring bonuses, job fairs and the end of extra unemployment benefits.

The daily reports that these employee shortages have hit the food and entertainment industries the hardest, pointing to a recent job fair at the newly opened City Foundry Food Hall that brought out far fewer applicants than its operators hoped — with 50 positions open, only about a dozen people showed up. “It’s really tough,” Susie Bonwich, the food hall’s operations director, tells the Post-Dispatch. “Everyone’s hiring right now.”

Other businesses reportedly struggling to hire include the Enterprise Center, Blueberry Hill, the Pageant, the Moonrise Hotel and Gus's Pretzels. Still others have thrown in the towel altogether due to the hiring crisis, with Nadine's Gin Joint closing just last week and St. Louis Wing Company shuttering at the end of August.

"I've been in the restaurant business for over 25 years, and this is the worst I've ever seen in terms of staffing," St. Louis Wing Company owner Bobby Tessler recently told the RFT's Cheryl Baehr. "It's happening across industries, but it's really affecting restaurants. You drive down any street, and all you see are 'Now Hiring' signs. That's what drove me insane enough to say that I can't do this anymore. I was having daily anxiety waking up every day and wondering what's going to go wrong, who was going to call in and who wasn't going to show up. I had to choose my health over my brand."

It's hard to say exactly what is driving the reluctance in potential hires to seek jobs in the food and entertainment industries. Some theories have blamed the enhanced unemployment benefits that were offered due to the pandemic, suggesting that potential employees were choosing to stay home and collect a check rather than work. But even as several states including Missouri have moved to end those benefits, hiring has yet to increase in any dramatic fashion. In fact, August's disappointing jobs report, released Friday, says the U.S. added just 235,000 new jobs in the last month — dramatically less than the 750,000 economists had expected.

Many experts blame the increase in COVID cases, spurred on by the rise of the delta variant, for the disparity in those numbers.

“There’s no question, the delta variant is why today’s job report isn’t stronger,” President Joe Biden said during a speech on Friday. “We need to make more progress in fighting the delta variant.

“This is a continuing pandemic of the unvaccinated,” the president added. “Too many have not gotten vaccinated, and it’s creating a lot of unease in our economy and around our kitchen tables.”

But if you work in the Missouri cannabis industry, you might have no idea about the employee shortage. According to MoCannTrade, analysts expect the sector will add "several thousand more new jobs, more than $800 million in direct spending and another $570 million in indirect spending over the course of its first full year of sales and operation."

John Pennington, CEO of Proper Brands and a MoCannTrade board member, says his company alone has seen approximately 4,500 job applications for a total of 150 full-time positions — with no signs that the high level of interest in the industry will let up anytime soon.

“The talent that we’ve been able to recruit has been second to none,” Pennington tells the St. Louis Business Journal. “This is an industry that is made up of incredibly talented people who are now in a position to work in a field that’s been a dream for them …. That’s not slowing down. This business is moving the needle.”