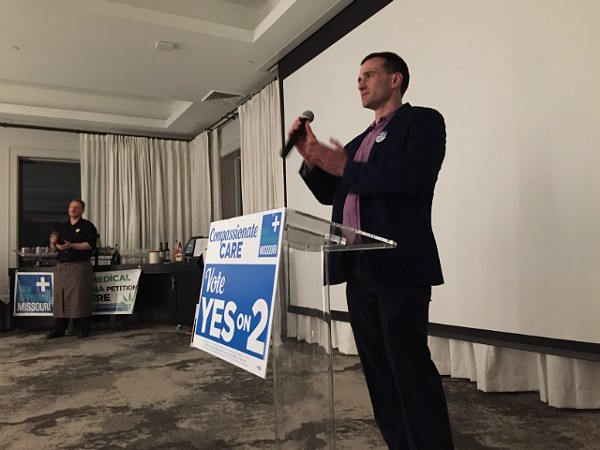 John Payne knows it’s time for Missouri to legalize recreational marijuana, but there’s something else he wants to go along with it: criminal justice reform.

Payne serves as a campaign manager for Legal Missouri 2022, a statewide coalition of activists, cannabis patients, criminal justice reform advocates and entrepreneurs. The organization hopes to put legal recreational weed on the 2022 ballot, filing a citizens’ ballot initiative on August 27. A petition will be created after it is approved by the secretary of state and will need signatures to get the measure on the ballot.

In addition to the legal use of marijuana, the ballot initiative will also include complete expungement of nonviolent marijuana offenders’ records.

“This is really one of the most profound criminal justice reforms that’s been proposed here in Missouri,” Payne says in an interview with the RFT. “What we’re talking about here is ending the prohibition on the adult use of marijuana and expunging records, in many cases automatically, so those people are no longer suffering the consequences of an arrest or conviction from five, ten, twenty years ago and are able to move on with their lives.”

Payne was part of the campaign that would’ve put recreational cannabis on the ballot in 2020, but COVID-19 had other plans and quickly disrupted the signature-gathering process. The new initiative is similar to that of 2020’s; it allows adults over 21 to use, grow and possess weed. The key difference in the two proposals is the automatic expungement.

The 2020 initiative required people to apply for expungement, which Payne explains comes with costs and burdens to applicants. Automatically wiping the record would take that burden away. The provision does not include violent offenders or offenses that include distribution to minors or driving under the influence.

Payne explains nineteen other states have legalized the recreational use of weed, something he now sees as “politically viable in Missouri.” He noted that he has more recently watched other states lean in more toward the criminal justice aspect of marijuana legalization as well.

“They’ve moved more and more towards the direction of criminal justice reform rather than just pure legalization," Payne explains. "But also, now they’re also going back and rectifying some of the previous wrongs."

According to a press release from Legal Missouri 2022, only seven other states have the same process of automatic expungement for nonviolent offenders. Citing an American Civil Liberties Union study, the release also adds Black people are more than twice as likely to be arrested for marijuana use in Missouri.

Three counties — Johnson, Lincoln and Lafayette — are ten times more likely to arrest Black people for marijuana possession rather than white counterparts, per the study.

“Cannabis reform is about more than establishing a safe and legal market,” Jamie Kacz, executive director of a cannabis reform nonprofit organization called NORML KC, said in a press release. “It is about righting the many wrongs prohibition has caused to our communities, especially to communities of color.”

Beyond criminal justice reform and creating a safer market for marijuana sales, Legal Missouri 2022’s campaign would also help give back to the community in the form of a six percent sales tax. The money gained would first be used to pay for the expungements, then distributed equally to veterans’ healthcare, the public defender’s system and drug addiction treatment.

Other taxes by state and local governments could generate what the organization's press release says will be tens of millions of dollars annually. Local governments are also allowed to assess local taxes of up to three percent.

Medical marijuana has already proven successful since sales began in October 2020. The industry surpassed $90 million in sales in July and more than 136,000 medical marijuana cardholders in Missouri.

The initiative also includes creating a new category of cannabis licenses to encourage participation from disadvantaged groups, which will in turn add a minimum of 144 new businesses to the cannabis market. Missouri already has 378 certified and licensed cannabis businesses.

The groups have to meet at least one requirement in a set of criteria: they must be graduated from or live in a ZIP code with an unaccredited school district for at least three of the past five years; have a net worth of less than $250,000 and income below 250 percent of the federal poverty level for at least three of the previous ten years; or have a valid service-connected disability card issued by the U.S. Department of Veterans Affairs.

Other criteria for the new category: those who have — or are related to a person who has — committed a nonviolent marijuana offense and those who live in an area with high poverty, unemployment or marijuana imprisonment rates.

Winners of the new licenses will be selected by a lottery. The ballot initiative will also have the option for medical-only licenses to “quickly convert” their facility to serve both retail and medical customers.

“Opening up the medical cannabis industry to more women, veterans, people of color, drug war casualties, those with disabilities and residents of job-starved neighborhoods is long overdue,” Adolphus Pruitt, president of the St. Louis City NAACP, said in a press release. “Increasing social equity in this sector is right for Missouri, just as it’s right for the rest of our country.”

The petition is expected to begin collecting signatures in the fall and will continue into next year. An estimated 175,000 voter signatures will be required to put the initiative on the November 2022 ballot.