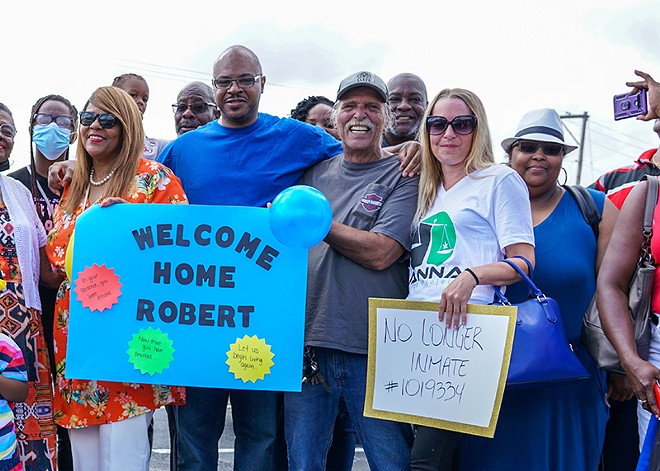 On July 1, more than ten years after he entered prison, Robert Franklin walked out of Missouri's Moberly Correctional Center to cheers from a crowd of family members and activists. They greeted him with balloons and handmade signs that read "Welcome Back Robert" and "No Longer Inmate #1019334."

It was a moment Franklin had only dreamed about. The welcoming party included his daughter, now fifteen, who had been eight months old when he was arrested in 2007 while transporting a one-pound brick of marijuana through western Missouri.

"It was a whirlwind," Franklin says, describing his final walk through the cell block toward the prison waiting room and exit doors.

"I couldn't believe it was really happening. The first person I saw was my daughter," he continues. "I gave her a hug, and we embraced for a long time."

After stopping at Steak 'n Shake for his first post-prison lunch — a double bacon cheeseburger with cheese fries, which Franklin calls "one of the best meals I had in eleven years" — his family and supporters met for a reception outside a Columbia cannabis dispensary.

When Missouri voters approved a medical marijuana ballot initiative in 2018, it became legal for patients to possess their prescription-approved medication — no matter its source. But state parolees have to abide by the conditions of their release: Franklin says he cleared the visit with his parole officer, but clarifies that he didn't enter the business and doesn't use marijuana because of the restrictions imposed on his parole.

Still, with a doctor's prescription, Franklin has obtained a medical marijuana card from the Missouri Department of Health and Human Services, just like thousands of other residents. He just can't use it.

In an interview six days after his release, Franklin tells the RFT that he's been staying in Columbia with his family and spending time with his daughter. They're making up for lost time. In one outing, the father and daughter went to a movie theater to see the film The Forever Purge, the latest entry in a horror franchise based in a fictional America where every year all crime becomes legal for twelve hours.

Of course, nothing so drastic has happened in Missouri — and yet, there's no overstating how much legal ground has shifted beneath Franklin's feet in the years since he entered prison in 2008. What was once a crime that could take ten years from someone's life is now a legitimate business. Today, if Franklin were a licensed cannabis grower and dispensary owner — or even an individual cultivator for multiple patients — his transportation of a pound of marijuana would likely be legal.

During the reception after his release, Franklin had gotten an opportunity to learn about the local dispensaries and grow operations. He came away from the conversations stunned.

"It felt like it wasn't real," he says now. "Like, how could this be? I did all this time for the same thing they're doing, but they're doing a major scale."

While Missouri's marijuana industry is moving forward, the state's justice system has largely left drug offenders like Franklin behind. Before his release, he was among the more than two hundred Missouri inmates serving ten-year-"mandatory minimum" sentences, punishments meted out without regard for whether the subjects were nonviolent drug criminals.

Like Franklin, many found themselves serving 10 to 30 years, even life terms without parole — the equivalent punishment for first-degree murder.

But in May, Missouri Governor Mike Parson commuted Franklin's 22-year sentence, making him the ninth drug offender to be granted parole eligibility under the governor's clemency program since 2020.

But for federal drug offenders like Eric McCauley, who spent more than twelve years in prison on marijuana trafficking and conspiracy charges before his release last month, the path to freedom started with a clemency application addressed to then-President Donald Trump.

In January, Trump issued a flurry of last-minute pardons before he left office. McCauley wasn't one of them.

He would ultimately be released through a different Trump-era policy, the 2018 First Step Act, which allowed federal judges to issue thousands of "compassionate release" orders, including many released as the pandemic swept through prison facilities in 2020.

Like Franklin, McCauley had grown up in Boone County and entered prison with an exceptionally harsh sentence for marijuana — 23 years — that separated him from his young child.

On June 24, McCauley stepped off a Greyhound bus in St. Louis, then drove with his mother to a nearby hotel. Waiting there was his son, who had recently graduated high school. McCauley wrapped his arms around him.

"As we were leaving the hotel," McCauley recalls in an interview, "my son points across the street and says, 'Hey, Dad, there's a dispensary.'"

Less than two days out of prison, McCauley felt a blur of emotions as he registered his son's observation — and what it meant about the state he had finally returned to after so many years.

"That might seem regular to normal people, but I guess [the dispensaries] are everywhere now," he continues. "It just really hit me: I'm here in the state of Missouri, and there's a business right there selling cannabis like I just did, and I went to prison for over twelve years for the same plant."

Sentenced in 2012 on multiple counts of marijuana trafficking and money laundering, McCauley was accused of running a massive marijuana operation throughout Missouri between 2005 and 2008. In 2007, police in Columbia raided a stash house used by McCauley and his codefendants, seizing more than $200,000 and 240 pounds of cannabis.

According to McCauley, the marijuana ring was a business he had hoped to transition to legality, a jump that he says other former black market weed dealers have since made in Missouri's medical marijuana market.

McCauley's arrest and convictions put those plans on hold, possibly forever. With marijuana still flatly illegal on the federal level, McCauley is prohibited from obtaining Missouri's legal medical marijuana. He says he takes Prozac to treat anxiety and other mental health issues related to his time in prison, but adds, "I think cannabis would be much better."

For his chronic leg pain, he downs as much Ibuprofen as he can take, though the medication "barely helps."

"I don't want to have anything to do with opiates," McCauley explains. "But I could get a prescription for Percocet and send a picture of the pill bottle to my supervised release officer. I could take all I want. I can't do the same with cannabis."