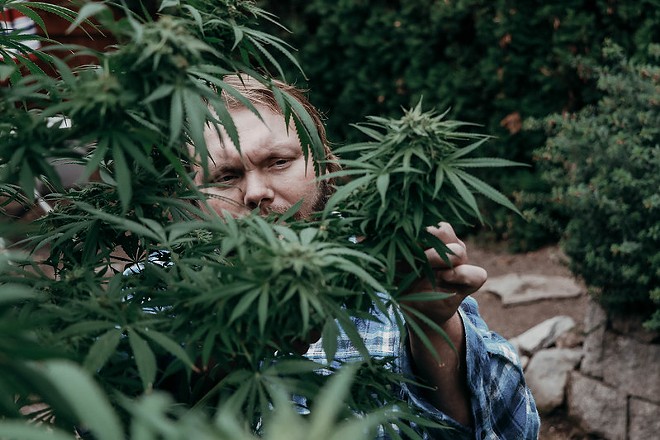 Once, as a fresh-faced teenager looking to re-up my weed supply, I showed up at my dealer's home on a sunny summer afternoon and was surprised to find that he no longer had a front door.

Said dealer, whom my circle of high school friends referred to only as "The Guy," lived in a trailer park in the county whose defining characteristic seemed to be its unnecessarily humongous speed bumps. The residents of the neighborhood had found a novel solution to avoid the suspension-destroying mini-mountains, as evidenced clearly by the wheel ruts in the yards on either side of the road wherever they were installed. It wasn't really a fantastic place to live, I guess is what I'm getting at — but still, the complete lack of a door was a new one.

I stepped into The Guy's home cautiously, and found that there was no furniture to be found within. This was normal — The Guy took a minimalist approach to interior design that mostly involved milk crates and a mattress tossed on the floor. There was a new aspect to the scene, though, in the form of about a half-dozen men passed out all around the living room and surrounded by empty cans of air duster.

The Guy arose from his midday slumber and came to greet me, explaining that he and his cohorts had been up all night drinking. They'd waited until the sun came up and newspapers had been delivered to his neighbors' homes, at which time they wandered out and stole the plastic bags the dailies came in and used them to help force as much compressed air into their lungs as possible. The Guy was hazy on the details as to why he no longer had a door on his home, but I felt like I had gotten the picture. Asked if I wanted a hit of duster for the road once our transaction was complete, I politely declined.

The Guy and I had a bit of a falling out in the weeks that followed when I purchased some acid sugarcubes from him that were heavy on the sugar and light — as in zero — on the acid, rendering that year's Fourth of July fireworks display merely magnificent rather than mind-blowing.

Soured on conducting business with The Guy after that disappointing experience, I began seeing another local dealer, whom my friends and I called "That Guy." Once, while I was waiting in That Guy's living room for him to complete my weed order, another fella who was there for similar reasons produced what looked essentially like a bottle of Visine from his pocket, stuck it up his nose, and took a big sniff. "Want some?" he said. "What is it?" I asked. "Heroin," he replied matter-of-factly. Again, I politely declined.

Those two experiences always come to my mind whenever I hear people refer to cannabis as a "gateway drug." For years, D.A.R.E. programs and similar prohibitionist propaganda hammered the idea that use of the demon weed would lead inexorably to more dangerous drugs — that marijuana was just a stepping stone on the way to the addiction and ruin more harmful substances would inevitably bring.

I always knew it was a crock of shit. By my estimation, the only reason I'd even been offered heroin or air duster at all — or for that matter, bunk acid — was as a consequence of weed being illegal. Being forced to purchase it on the black market is what led me to meet such shady characters as those Guys in the first place.

With these formative experiences in the back of my mind, it's more than a little surreal to now be in a position where I can not only purchase cannabis legally, without the risk of being offered any manner of life-ruining substance in the process, but at the behest of a publication that is actually paying me to do so. The first time I stepped into a local dispensary and bought some weed — which was last week, actually, upon receiving the news that I'd gotten the cannabis critic gig at the RFT — was completely disorienting. Purchasing pot in a professional environment more akin to a cellphone store than a flophouse full of degenerates is not something I think I'll ever quite get used to.

Still, I can't help but feel for the street dealers left behind. My own guy, whom I do not refer to as any manner of "Guy," has served me well for a good while now, delivering to my home and charging rock-bottom prices in comparison to those found at the dispensaries. It's likely that, were it not for this gig, I'd still be going through him.

Things being as they are, it's time to bid a fond farewell to my weed dealer as we prepare to begin running cannabis criticism in this paper (watch for that to kick off next week). In keeping, I thought an exit interview of sorts would be appropriate.

For obvious reasons, we won't be IDing him, and we'll be referring to him only as Mr. Nickname going forward. We spoke with Mr. Nickname about what he has to offer that the dispensaries do not, what his next plans are now that legal weed is encroaching on his business, and why he'd never make it as a budtender.

What do you think of all of these medical dispensaries horning in on your territory?

I just hope their prices remain outrageous. That could help me.

What is it that you have to offer that the dispensaries don't?

I'm not going to be giving you that fake fucking Guitar Center bullshit, you know what I mean? And you don't need to show me any paperwork. You can give me a fake name! It won't matter.

I know that, prior to this, you spent some time driving a taxi, right before Uber came along and squashed that industry. And before that, you were trying to earn money playing music, just in time for people to stop purchasing physical media altogether. What's next for you, as far as making money is concerned, now that they're coming after your weed job?

Oh, I figure if I start my own oil company I can save the world. Because they'll come in and shut oil companies down. It'll be like, "We don't do that anymore."

Have you ever considered working as a budtender?

Oh no, it sounds awful. I bet you can't smoke cigarettes, I bet you can't go outside whenever you want. I mean maybe; it sounds great and I'm sure I'd do a good job of it, but they'll be like, "OK now, when we're at work, this is how we work at this place." You know what I mean? And I'll be like, "No, fuck you. I go outside and smoke cigarettes when I feel like it." Have to worry about, "Oh man, hope I don't have to poop." It's bad enough when somebody's coming over to your house, but then it's like, "This guy's got to poop all the time, I don't know. We should probably take some hours off his timecard."

What would be your pitch to keep people buying from you, the weed man, rather than going to a licensed dispensary?

You know the money's going to a good place: me and my animal friends. But that's the thing, I don't want everybody coming to me. I'm gonna make too much money that way, and then you start looking stupid and somebody is gonna be suspicious. So it's like, I guess don't come to me if you weren't already. Unless, you know, maybe some more people. But I got a pretty decent thing going if everybody goes to me instead of the store — just the people I know. I'm not looking to be a store; that's too much. That's too much work.

Keep an eye out for Tommy Chimchard's new weed column, Reeferfront Times, starting next week, and follow him on Twitter now at @tommychims.